The cold howl of a raging gale rips through the silent street, a swirling vortex descending from the otherwise unblemished blue sky, the sudden crackle of static pings off the silent brick buildings as the great swirling maw opens, depositing a cloaked figure in a heap on the unforgiving ground.

The vortex closes, the various detritus being buffeted by the tempest falls to the ground, still once more, the figure rises from the ground, gloved hands deftly smoothing and righting their attire. The figure looks around, releasing an irritated huff.

"Darned mages, can't get anything right, this isn't GaryCon..." He raises a hand, pulling back a hood to reveal the fuzzy face, sharp fangs and rounded ears of a sable ferret.

The ferret uses a gloved hand to rub at his face, then stops.

Hi, Im Terris, an avid roleplayer for at least the last two and a half decades, possibly longer.

I love animals, dungeons and dragons, video games, roleplay, crochet, cooking and many, many other things.

While I'm not a furry, most people (myself included) are painfully aware within moments of meeting me that my online persona (and offline too) has a lot of traits in common with your average ferret, from the slight alignment lean toward chaotic naughty (not evil), to my love of shiny things.

I look forward to roleplaying with you all at some point.
It matters not how long you live, but how well
Top 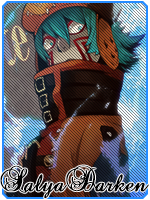 Welcome to Tainted Onez, Terris. I love how you did this post. =3

I don't know much of D&D but I need to read into it since my RL husband is into D&D. XD But feel free to tell me about about it to help me understand it. XD

Anyways, if you have any questions, you may PM me. ^^

Hey and thanks for the warm welcome...

DnD is basically just roleplay, only you have one person (the Dungeon Master) sort of "running the show" in so far as they put the obstacles in your player's path, and the players react to them.

Unlike roleplay (well for the most part) your characters have set stats, a race that has special abilities (for instance a goblin has dark vision and is able to use certain things like grovel, cower and beg to give his friends and himself advantages in battle etc) and a class that also has special talents, abilities, strengths and weaknesses.

These stats and abilities help determine what a player can do in and out of battle in the world, for instance a bard will have a bonus to charisma, making it easier for them to persuade someone to do something for them, while a fighter may have a bonus to strength, meaning they are more likely to be able to hurl a large rock at someone to squash them.

If I was roleplaying I would say "Terris sneaks forward, eyes shifting this way and that as he reaches his paw out and deftly swipes the shinything. He then turns, scampering away with a bristled tail, the faint sound of chuckling can be heard as he dashes toward the undercouch and disappears"

With D&D it would be more akin to this.

Me: Terris spots the shinything and sneaks forward, eyes shifting this way and that.

DM: You are now practically invisible.

Me: Terris reaches a paw out toward the shinything, attempting to swipe it"

Me: *rolls the same 20 sided dice, adding my slight of hand bonus to it* (lets say I fail with a low score this time) 8.

DM: As you reach out your paw, you knock over the shinything and it clatters to the floor, the shopkeeper spots you. "HEY! Leave that alone, you naughty ferret" he says, swatting at you with a broom...Make a dexterity save (etc)

So that's very basic but you should get the idea :)
It matters not how long you live, but how well
Top

oooh okay. I get it. I don't know if D&D style Rps will be around other then rare events based on it, but it's something interesting to read thou I don't really like that style. XD I like the Role-play story style or w/e it's called over that. lol

ah yeah, i thoroughly enjoy both :D
It matters not how long you live, but how well
Top

hi! your intro was so cool! i like d&d too and i have some ocs for it im really attached to but i dont actually get to play hardly ever any more ^^; ferrets are cool too, im gonna guess you like to play rogues!

Return to “Introduce Yourself”

Users browsing this forum: No registered users and 1 guest